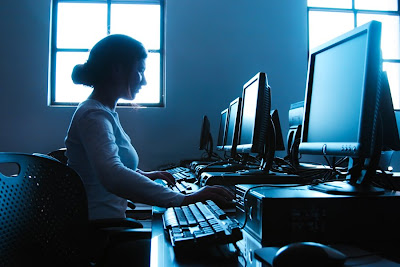 I know I should be talking about Gov. "Let's Make a Deal" in Illinois, but I don't have much to say. He appears to have been a blatantly crooked bastard who seemed oblivious to this new invention called wiretaps. The cats on The Wire were much better criminals then him, and therefore, far more interesting.

Instead, I would like to talk about an interesting conversation I had with a friend recently. Since I opened her eyes to the rampant racism in the world, this friend has been astounded at the hatred that abounds in people's hearts. She and I often send each particularly vicious comments left by readers on racially-tinted articles just to marvel at the level of vitriol and predictability.

The other day, after reading a ridiculously racist comment, my friend broached an interesting topic. She said that as she's gained more knowledge about racism and interacted with people who fight against racism, it's made her more conscious of racism's role in the world. She's also found validation for certain niggling suspicions she had in the past, simply because more people have echoed her suspicions.

She said she considered herself pretty "race-neutral" in the past, but that's changed. She wondered if white people who consider themselves "race-neutral" change that position once they encounter groups of other white people validating stereotypes about minorities and discussing various negative experiences with minorities. My friend thought since racist sentiments abound on the internet some people might feel validated in their own personal racism, which in turn would create more division in the world.

Well I just had to write a blog post about that.

Where to begin, where to begin...Honestly, it's not that far-fetched to assume that hanging around like-minded people only reinforces our existing beliefs. That's why strident racism and strident religious beliefs typically decrease with more education and more diverse life experiences.

Yet, I honestly had never considered the possibility that what I consider obviously racist anonymous comments might soothe the consciences of some people and make them less likely to root out and remove racist attitudes from their lives. Now that I have considered it, it makes perfect sense.

The truth is, just about everybody in the world believes in some stereotypes. Stereotypes are the easiest ways to classify people into benefactors or threats and most human beings like things easy. In fact, the only thing holding people back from embracing and repeating the stereotypes accepted as gospel two or three decades ago is the fact that minorities are better able to generate a backlash today.

Back in the day, there was no real penalty for saying black people did worse in school because they were genetically inferior, or saying that Asian women were more docile because they have weak blood. Everybody just nodded their heads and agreed. Today, those same comments generate a shitstorm of attention thanks to the plethora of minority groups who immediately spring into action and create the perfect media controversy. Thanks to civil rights gains, minorities have a bigger stake in America, and their complaints are given more weight.

But, in many ways, the internet is a lot like the good old days.

The anonymity and sheer size of the web makes it difficult for minority groups to combat digital racism. In addition, mainstream media types tend to marginalize the impact of web behavior because there are no easy images or named sources. That has turned the internet into the racial Wild Wild West, and it explains why the comment sections on most websites rapidly transform into Klan rallies when issues of race are discussed.

Initially, I actually viewed the racism on the web as a good thing. I figured that people were finally saying what they really felt, and I was being given a true idea of where the world stood as far as race relations. But, my friends comments made me reconsider that position.

Validation only encourages idiocy. Instead of the web becoming a place where idiotic ideas are challenged and refuted, it's becoming a place where idiotic concepts are celebrated and given more heft because more people are saying them. Before the web, a racist idiot might be isolated in their racism, and if given the right life experiences, might begin to change their views.

Now, that same racist can find a whole community of like-minded individuals who not only bolster his beliefs, but also provide him with a great recruiting tool to sway other folks. After all, most people only need to be told that they are part of the "in crowd" to adopt any imbecilic position. If a racist can show easily influenced individuals that the resentments harbored inside their hearts are normal and acceptable to hundreds of other people, it's much less likely that person will do any self evaluation.

While the internet is traditionally praised for its ability to open up the world and spread knowledge to everyone, I now wonder if that's true. How many of us use the web to learn new things, and how many of us use it prove the things we already believe?

i hear ya and agree with ya.

But, I would also say flip that for the black blogosphere as well. All of us who blog with some modicum of consistency have a set percentage of people who agree with us fully. Even if they never comment, they have confirmed their ideas and philosophies. Actually, I haven't done a recent blog search just clicking from one blogroll to the next lately, so perhaps I'm out of the loop, but the most popular black blogs are largely ones that don't really introduce new thought into the community. Perhaps they may do same old same old with a unique flair or twist, but I really haven't read a lot of blogs that stretch conventional wisdom. As a rule, from what I've noticed personally from the blogs I hang around, opposing thoughts aren't always dealt with in a manner I would like. By in large they are ignored and passed over for more familiar musings.

That's a roundabout way of saying blog readers flock to what's familiar. The chances of me reading a blog where someone still speaks of the Civil War as the War of Northern Agression are slim to none and Slim is on vacation.

Im not at all excusing these white rants because I get them from time to time, most of them accusing ME of being the racist or all blacks being the true racists of the world (which is LAAAAUUGHABLE) and generally I post it just to let others know they exist. I do to let them know and whomever else that in actuality they are in the minority and that what they have to contribute is not in the vein of a productive society. i welcome criticism, but the vile hatred that ignorance breeds is not my cup of tea at all.

This was a ramble, excuse me.

It was a welcome and astute ramble.

From racist muttering to ideological rants to porn/sexual kinks, the Web is such a two-edged sword, as you've noted.

It makes it so much easier to find people like you, in a world where before, you might have inadvertantly and incorrectly thought yourself a freak.

On the other hand, it also allows the freaks to think they are normal...or at least justified in their freakishness

That is very heavy --- made me stop and think. I suspect we do it in many other choice we make -- the books, magazines and newspapers we read; movies and TV programs we watch; people we associate with; etc. It is more comfortable to be confirmed than to be challenged. It takes less effort to be provincial. I think I am guilty as charged.

Greatly enjoy your blogs. Keep up the good work.

That's a knock out post, and indeed, the web has become a paradise for haters who can hide behind their anonymity and influence the young to become just as jaded as they are.

I guess I have to say that I do both. I look for blogs to affirm what I already believe but also to challenge what have believed that may not be true. Religion is an area that I have many preconceived notions that are not shared by many but I welcome the mental challenge to rethink my position and accept a new way of thinking. Im not sure everyone comes into this world of the internet. People say very foolish things when they cant be seen.