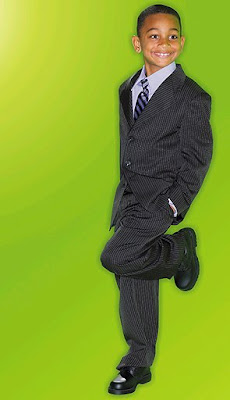 My parents never sat me down and had "the talk."

You know, the sex talk.

My pops told me that if I ever brought any babies home they were my responsibility, but we never discussed love or sex in any detail. I got a lot of reminders that God wanted me to wait until I was married to copulate, but I also got treated to stories about how my dad got his first piece of nookie at either nine or 13, he could never be sure.

I could have been described as a "sex rube" for much of my young life.

In fact, as a youth, I thought foreplay was punching little girls in the head and running. I was more likely to call a girl I was enamored with an "ugly dummy" while tripping her, then to whisper sweet nothings in her ear.

Basically, I had nothing on this little boy.

That young fella recently wrote a dating book for adults. He outlines the dos and don'ts of how to get the girl of your dreams, and he's only nine years old. Plus, as an added bonus, he'll soon by publishing a children's book about the Watergate scandal.

Actually, he's scary. He's scary because he's not living in a child's world. No nine-year old should be getting book deals for relationship tomes. I understand that he originally wrote the book for his school's book fair, but in the end it became something that was pumped out to the masses. Now he's doing book tours, and according to the Post's story, posting up at the bar with his adoring fans.

And I'm not jealous because I know some of y'all are wondering about that. What I am is disturbed with how quickly modern children are asked to assume adult roles in today's world.

When I look at my little boy, I want to teach him how to become a man, but I also want to give him space to enjoy childhood. I would not be ok with him sipping Shirley Temples at the bar and talking to women about the lame pickup lines guys use. I also don't like how so many kids today need their own Blackberrys to keep up with all their ballet lessons, piano recitals and sporting events.

I wonder if we as a society have become comfortable with seeing our children as nothing more than tiny adults. They have adult responsibilities and adult rewards. Flashy jewelry, expensive toys, all the trappings of the American dream are being thrust on children at younger ages. And that doesn't even account for the violent, sexual images streaming into our homes.

And they need to play their positions.

There is an interesting dichtomy here in America.

I see an increasing number of folks, mostly fundamentalist Christians, who argue that we are coddling our kids and keeping them children too long and that they should be growing up faster and getting married and having kids pretty much right after high school. They often think the adolescent phase is a made-up construct and they point to the old days when a person was virtually considered grown pretty much at 12 or 13.

On the other hand, we have your example here...and the paretns who doll up their girls to look like grown women for beauty pageants, and other things like that...a sign that we are allowing our kids to grow up too early.

So, it's interesting that for two very different reasons, very hard-core Christian America and more secular, media-obsessed America are both calling for (or allowing) kids to grow up way too fast.

Given that we're getting it from both ends, it's going to be hard to raise kids as kids for long anymore. It's worth shooting for, and we need to try, but it's rough.

I saw that kid on Ellen... he really needs to get a nintendo wii or something... its bad enough we have all these doctors and pyschologists and so called relationship experts telling us that there is a right or wrong way to love and now we have a 9yo...

Thanks for the comments.

That was some interesting news you gave me about fundamentalist Christians. I haven't seen that as much in the black church. It's still stressing going off to college and getting settled before getting married. Thanks for the insight.

Yeah, I think it's still a minority of even white, hard-core fundies, but I've seen some pretty vociferous opinions on the matter from them...something I've never seen before nor would have expected to.

Children only have little more than a decade in which to be silly kids. They have the rest of their lives to be "grownups". A child's innocence is a blessing to cherish for as long as practical and anyone who deliberately profits in the loss of it? Makes me want to kick them, hard.

There are still cultures/circumstances that demand that childhood be brief and put aside for the survival of the family or tribe or village but here in America we have the luxury of allowing our childrens' development to pace their physical maturity. The studies on how the brain is still adapting to the hormonal changes of adolescence all the way through the late, late teens are a clue to the fact that while a young person may have all the outward attributes of adulthood their cognition and recognition of the consequences of their choices are far from fully baked.

That's where we come in. As you say, teaching them to play their position. "Because I'm your parent and I know better and I say so" is a completely logical and reasonable rule.

I found this site using [url=http://google.com]google.com[/url] And i want to thank you for your work. You have done really very good site. Great work, great site! Thank you!

Who knows where to download XRumer 5.0 Palladium?
Help, please. All recommend this program to effectively advertise on the Internet, this is the best program!