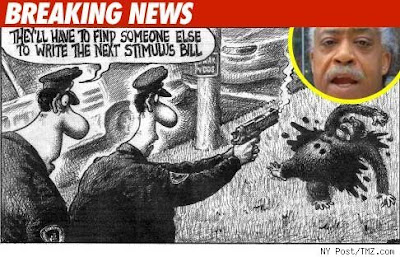 What does that say to you?

Is it a funny pun about rampaging chimpanzees and the ridiculous size and scope of President Obama's stimulus plan? The kind of joke that pokes funny at those always idiotic politicians we seem to send to Washington every year?

Or, does it say something darker. Does it seem to you that this cartoon is advocating that a "monkey" like President Obama should be shot for even attempting to pass something like the stimulus package. A reminder that this "monkey's" tenure as president has barely begun and already he's out of control and needs to be put down.

What do you see?

I'm sure most of y'all can guess what I saw in that picture. And, those of you who have discussed racism with folks in the general public can probably guess what the many commenters on blogs and websites across the country saw as well. Obviously, they were not the same.

After all, without trying, I was able to understand both potential meanings of this cartoon. I instinctively knew how the New York Post would respond to any criticism of the commentary and I knew how the general public would react and what their explanation would be. A chimp had just gone crazy the day before, bitten off a woman's hands and been shot by the police. Obviously there was obviously a valid reason for connecting chimps and police shooting.

Honestly, what benefit is there for most white people in knowing what offends or bothers black people? What benefit is there for people of any race? It probably won't you get a job or buy a home, it won't make you money, and it'll probably just make your life more difficult. If you worry about what black people find offensive, then you have to change your jokes, have uncomfortable conversations with family and friends, and generally interrupt your very settled and comfortable life. Who wants to do that?

It's much easier to say, as one commenter on TMZ put it: "Only a person who can't see past race would see this photo as racist." That neatly shifts the blame for being offended to those kooky people who go out of their way to find reasons for offense. So smooth. That way, you can feel superior and brave. You're telling an inconvenient truth and black folks and their sympathizers need to understand how the real world works. Lovely.

Truthfully, there are some legitimate questions to be asked about the response to this pic. After all, President Bush was compared to a monkey and black people didn't think that was racism. Here's a refresher, if you don't remember:

Only, from where I'm sitting, none of those pictures involve the former president getting shot. I mean, he looks funny, but he's not dead after being shot by the police. Just an observation. And, while the actual chimp was killed, that was only after he attacked an officer inside a patrol car. Originally, he was led away alive and in shackles.

See, that makes all the difference in my mind. It's not about me searching for a reason to be offended, it's about me having an understanding of the subtle messages society feeds us about the lives of black people and how to handle black people when they get out of line. Furthermore, my feeble mind is struggling to see how the shooting death of a rabid chimp relates to those people who worked on the stimulus.

Are they being compared to rabid chimps? If so, why? What about their actions shows that they are engaging in uncontrolled violence? There are far easier ways to make the point that the individuals who constructed the stimulus package and championed it were bumbling apes. I don't quite understand how comparing them to a violent monkey that was eventually shoot serves that purpose. A friend of mine posited that it might be an allusion to an old mathematical theorem about a chimp pecking away at a typewriter. But, that seemed a little too abstract for the Post.

Being attuned and informed about historical and current events makes it impossible for me to look at that cartoon and not see the connection between President Obama and a dead monkey. That would be like me seeing a picture of Lil' Kim today, and not being reminded of the damage European beauty standards do to black women everyday.

Unfortunately, that picture doesn't speak to everyone the same way, and neither do most things in the world. It's unlikely that we'll ever reach a consensus on subtle racial matters.

The monkey business will continue.

Damn... they got curious george.

All said and done... there will be racism for reasons the avg person cannot understand. God's law make it HARD for us to all get along... there are different nations for that very reason.

I don't what the future holds in regards to racism, but as long as folks keep being racism deniers, things are going to be rough.

There are several ways you can look at this, though the so-called cartoonist could have picked other dialogue to state his case. I never really bought into the whole "monkey" analogy concerning specific racial groups, though it gets irratating recalling it every once in a while when it gets brought up.

Then again, this is the NYPost. You can do a search on their countless covers or even search the cartoonist's past work and see it's a waste of time and energy understanding their take on certain issues.

let us remember, the chimp was shot for mauling a white woman...

And, to add to the uppity negro's point about the "real" chimp, I think the take-away message the cartoonist want people to get is that Obama is dangerous to our wives and daughters and grandmothers because he's going to ruin their lives with this stimulus package.

Because, ya know, our grandmothers and such are all REALLY worried that we'll have fewer rich people in the country. They're not worried if they and their families have jobs, or if another bridge will collapse in a city and kill one of their loved ones...nah, they're at risk from the evil, rabid, destructive Barack Obama.

Shit, even if you go with the "benign" interpretation that Obama and gang are stupider than chimps for creating this package, that still falls flat, as Obama on his stupidest day is still godlike compared to Dubya's intellect.

It's interesting that you note double consciousness because for me, that was certainly at play here. I "got" the cartoon in many different ways.

The New York Post has always been a problematic paper and I hope that now folks will refuse to buy it even if the price of a copy goes down to 2 cents. The only thing these folks understand is a hit to their wallet. Not protests and calls for boycotts but actual loss in revenue.

The new York Post has been the worst daily rag in America for a long time.

having grown up in new York, I swear that I am not surprised... and that this will likely not affect their circulation... and I hope that I am so wrong on that second count...